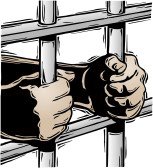 Did you know that the British Kochi had prominence in the history of the nation? It was periodically dominated by the Portuguese, Dutch and British invaders. On the occasion of the 63rd Independence Day, the history-laden Fort Kochi Jail was dedicated to the nation as a heritage site. Some of the prominent freedom fighters and leaders like Muhammed Abdur Rehman, K J Harshal, A K Gopalan and E M S Namboodiripad had been jailed in the cells at Fort Kochi during their movement for the freedom of the nation.

The old Fort Kochi jail had witnessed the confinement of several freedom fighters hailing from the erstwhile British Kochi. The jail complex had eight cells and six freedom fighters were used to be put in a cell. Each cell was just six metre high and 50 sq feet wide. The cell just had a six-foot concrete bed and had a small hole to drain out waste emanating from the jail. The exact date of establishment of the jail is not available but the incription on a roof tile goes as ” The Commonwealth Trust, Ltd, Calicut, 1865”. Cochin Heritage Zone Conservation Society took efforts to renovate the jail complex, at an estimated cost of Rs 10 lakh sponsored by public sector Bharat Petroleum Corporation Limited (BPCL). It took 45 days to complete the renovation.

A proactive and cheerful engg. graduate awaiting call from a MNC. . . . .

View all of jisha's posts.