Before 2003 Avial was the name of a delicious south Indian Dish. That’s the year when the rockers of Kerala saw the rise up of a new rock band by the same name of the dish. Avial, the “Alternative Malayali Rock” changed the usual style of rock bands. The fusion of native folk music and alternative rock was well received by the head bangers all over India.

Buddies of Cochinsqaure Amvizone promotions are promoting the movie Salt N’ Pepper. We  had a chance to have a chat with  Avial and we began shooting questions.Check out he Exclusive interview with Avial . Thanks to Amvizone. 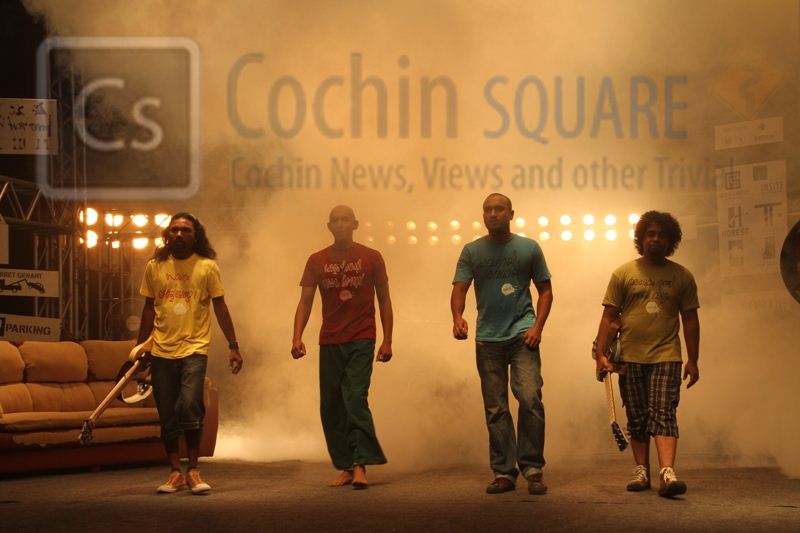 1. it’s been a long time that you guys have been into rock music, Can you tell us about how the Avial got together?

All of us have been playing in different bands earlier but we knew each other and as fate may have it we got together and Avial was formed….

2. Avial is doing the original soundtrack of  Ashiq Abu’s new movie Salt n Pepper , How was it like to do a sound track for a movie ?

Aashiq is a good friend and when we were requested to do an OST we were thrilled. It’s been great working for the song and a killer experience shooting for the song’s video.

3. Anything behind the name Aanakallan , is  the name related to the movie ?

Nothing in particular, actually. Like the movie it is a very light and fun filled song that talks about small time thieves and its theme syncs with the movie’s theme in one way.

4.Most of the rock bands stick with English songs , What is behind the idea of singing Malayalam ?

Ok, the thing is that we could have chosen to play English music, because we’re all highly influenced. But I personally feel that we are able express ourselves well and connect with the basics of our lives when we sing in our mother tongue.. When we sing in Malayalam, we know that it’s completely original and we’re really proud of that.

5. It would be great for our readers to know more about the band members?

We have recently launched our website (avial.in) and we’d love it if you’d visit it. All that you need to know about the band and the members is in there.

6. What was your inspiration or motivation of setting up a band together ? What makes you go when you guys are in stage?

Music is our inspiration and once we started we clicked as a band and it is this feeling that gets us to do what we do.

7. Lots of Rock bands are coming up in Kerala , What do u think of the current scene in kerala?

There are a lot of bands that are coming up with real talent everywhere. With this online revolution, getting noticed is not a big deal at all. So if you’ve got stuff you’ll have listeners. In Kerala there are many bands playing very original and contemporary music and we feel its a good time for alternative music here.
8 . You have attended countless concerts and shows. What is Avial’s best experience so far?

Every concert is an experience and all shows will have something special to offer…it’s a bit difficult to put a finger on the best experience so far.