Who else could better host an exotic sea food fest, if not the Queen of Arabian Sea herself? All of Indian delicacies, from Goa, Mumbai, Andhra, Kerala, Karnataka, Tamil Nadu and Gujarat are coming down to the Casino Hotel, Willington Island to kindle your taste buds. The fest which will start on the 29th of August is ready to make sure that it treats everyone who has a love for sea food delicacies by continuing till the 7th of September. 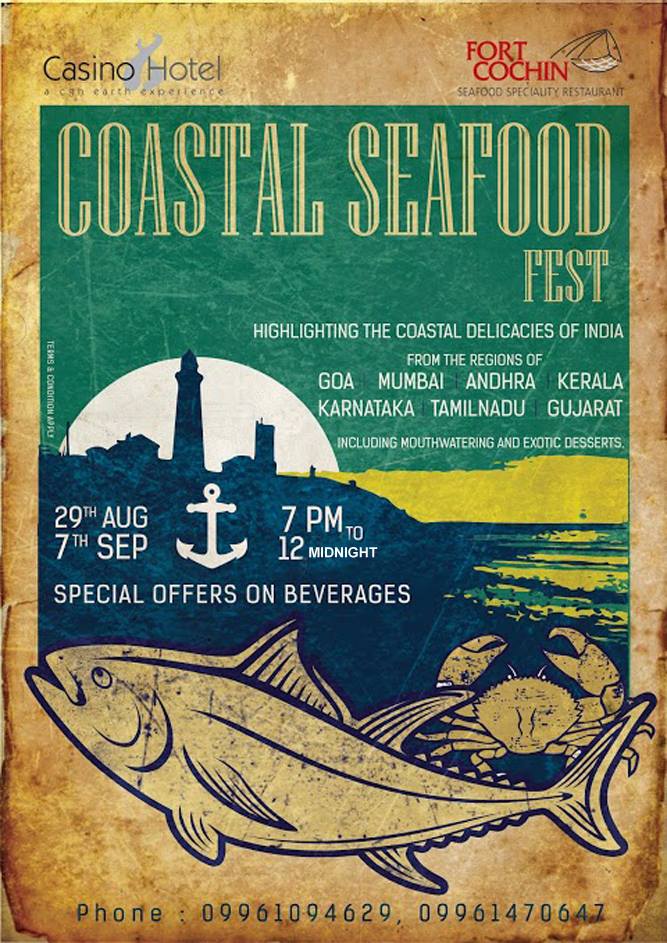 The fest that span for over a week promises to serve exquisite coastal sea food cuisine that hail from every part of India with its authenticity and freshness. The Casino group’s restaurant is popularly called the Mecca for sea food lovers, and the name in no way is misleading, hence making a precise point that this is not going to be a disappointment. The soothing ambiance mixed with the exotic and practically never ending sea food menu would make sure that you are breathing in an air of satisfaction and taking in the aroma of perfection.

The excitement doesn’t limit to the main courses offered. The brilliant feast ends with desserts served which will be more than just a cherry on top, as the chefs are dedicated in bringing you the best in class and a class above. If you are a sea food lover who just wouldn’t dare miss the next big thing happen to you, make your way to the Casino Hotel between 7PM and midnight.
For queries, call +919961094629 or +919961470647

I am Anand Subramanian, a digital marketing consultant and CochinSquare.com is a passionate contribution to the city I live in. You can read more about me at www.TheAnand.com or follow me on Twitter @theanand.

View all of TheAnand's posts.