With not much plans in mind for yesterday evening me and my friend Ranjith were planning to watch “Pranjiyettan” once again. Going through the timings of movie shows in Cinemax Cochin, Ranjith noticed the movie schedule for “Cocktail”. Remembering the script work of Anoop Menon in “PakalNakshatrangal”, with no second thoughts we decided to watch “Cocktail” @ Cinemax Cochin. The movie very much impressed us very much and worth watching. Moreover, our  meet with actor Jayasurya and actress Samvritha took our joy to more heights. 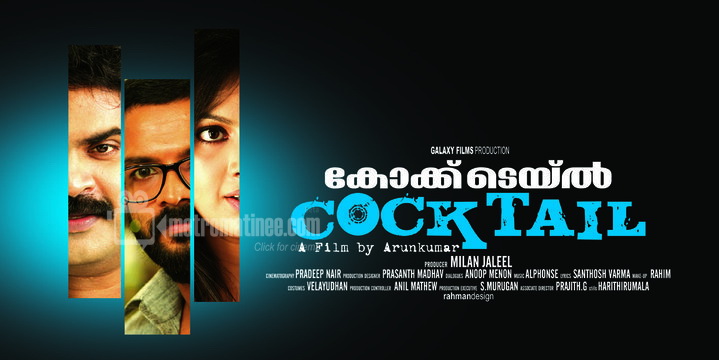 Now let me come to the review.

Anoop Menon and Samvritha really resembled the young “love married” couples. The dialogues between each other had no artificiality. It had the flow how the young generation couples who talk and behave. Lovely!!!!

Really loved the way which the scenes were shot. The scene at the supermarket where Samvritha talks in the mobile phone and leaves her child behind was shot in a very natural way. Especially the way which Vallarpaadam was shot very impressive. Shot at the colony was also good. Shots inside the office, home, restaurant etc good. The lodge scene in which Jayasurya tries to take on Samvritha infront of Anoop Menon, reall great. Nice work Jayasurya!!

The songs were impressive. Loved the lyrics and its music. Background really need to mention : great work. The background score of Jayasurya was awesome and it also synced with other background music when mixed together.

The story reflected very much to the life of the present generation couples. Hats off for choosing the particular theme and working out well.. And as Anoop Menon said ” This is a story in 2010″

#Suggestions and #Dislikes or #Flaws :

Well, I really have no dislikes  to mention. I enjoyed the movie through out. Well suggestions/flaws yea, but for that I need to catch the very simple things else there is nothing to mention