Union Minister for State External Affairs, Govt. of India, Dr.Shashi Tharoor, flagged off the ‘I am an Entrepreneur’ Campaign from Technopark on August 21, 2009. The campaign is initiated by Technopark-TBI/TUC in association with Department of Science and Technology (DST) and Department of Scientific and Industrial research (DSIR).  The campaign is executed by TechnoFIRST Magazine and sponsored by AIRCEL. They will be visiting all the engineering colleges and few arts and science colleges across Kerala. The sole intension is to identify and promote the entrepreneurial talents in the state, especially from student level. 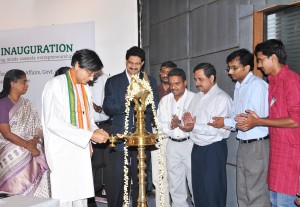 The objective of this campaign is to ignite the young minds in the Engineering colleges and Business Schools, to get more innovators and find out more students start-ups right from college campuses. The campaign is carried in a motivational video sharing the experiences of some of the very successful entrepreneurs and visionaries in our state and which aspires to inspire the students to take up on new projects on their own. It will be an informative and inspiring video on Entrepreneurship and Incubation Awareness. The video contains inspirational talks from various personalities, including Mr.Kris Gopalakrishnan (CEO, Infosys), as a successful entrepreneur from Kerala, and Dr.Shashi Tharoor (Hon. Minister), as a well known visionary.

After lighting the lamp, Dr. Shashi Tharoor said that Keralites outside the state have become successful businessmen and so more and more Keralites should stand up and say that ‘I am an Entrepreneur’. He also pointed out that failure as an entrepreneur is only a learning phase for buddung entrepreneurship.  He appreciated the efforts taken by Technopark-TBI for creating a fertile eco-system for budding entrepreneurship in the state.

Ms. Sheela Thomas presided over the function and read the wishes from Chief Minister Sri. V S Achudanandan that Govt is very happy with the ‘I am an Entrepreneur Campaign’ as the campaign is also intending to reach out to the students of Arts and Science Colleges and Rural Innovators along with the Engineering Colleges and Polytechniques. She also offered to extend all possible support for the success of the campaign.

“To encourage budding entrepreneurship we provide a fantastic system called Technopark-TBI. The Campaign will give the required motivation for the students to take up the entrepreneurial route” says Mr.Mervin Alexander, CEO-Technopark.

To know the latest updates about the campaign, logon to www.iamanentrepreneur.in. The website provides you with tips and advices from the market leaders and business gurus, and interaction forums to be aware about what others think.

A proactive and cheerful engg. graduate awaiting call from a MNC. . . . .

View all of jisha's posts.