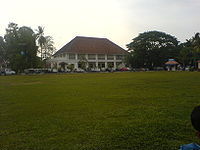 Bang in the middle of Ernakulam city we have the durbar hall art gallery and durbar hall grounds. The ground hosts various public events which are of interest to the general public .The art Gallery was formerly known as the Parikshit Thampuran museum. The museum has an impressive collection of coins, bronzes, copies of murals and megalithic relics of Kerala .

It was here that the erstwhile Maharaja of Cochin held his durbar. The place encompasses an area of 2-acre (8,100 m2). The ground witnessed some major proclamations dating back to the royal era including the administrative reforms, the new constitution of Cochin State and the formation of the cochin state central war committee. The famous literary magazine of yesteryears “Rasikaranjini” by Appan Thampuran and Kunjikuttan Thampuran was also published from here.

The grounds hosted football games and cricket for quite some time. Games between the local town club and the British army club evoke nostalgia among the older generation. Swanton’s cricket club had its home here until it was forced to move owing to the renovation works undertaken by the District Tourism Promotion Council.

The ground is presently owned by the revenue department. The ground now sports a lush green look owing to the work undertaken by the District Tourism Promotion Council. The Durbar Hall was renovated during 1998-1999 giving it a splendid look. The Durbar Hall ground is located on Durbar Hall road with entrance at the north end opposite Rama Varma Club and one opposite TDM Hall.

View all of JayaKrishnan Unnithan's posts.