As the Malayalam new year is at the doorstep, its time for some new Malayalam calendar. Moozhikulam Sala will bring out the calendar in ‘VATTEZHUTHU’ or older Malayalam script for the sixth consecutive time. This time they will strike back with many new features. 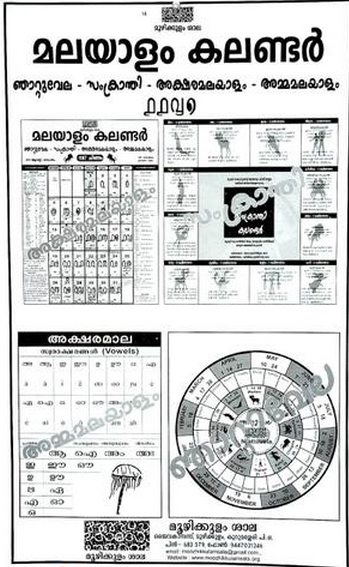 The details of the month from chingam to karkidakom in Malayalam era year of 1187, which begins on August 7th will be there as a regular feature. There will be ‘NJATTUVELA’ calendar to guide farmers in the land, as a feature add-on. The calendar that follows the path of sun – ‘SANKRANTI’ and ‘AMMA MALAYALAM’ calendar to introduce the Malayalam script with the help of English phonetics will be the added feature. This new design of calendar is made to make it informative, especially for children. All the 18 leaves feature traditional wisdom and snippets related to nature friendly lifestyle are added to make it more information oriented.

The main feature of this calendar is that it gives details of the corresponding months in Roman calendar and introduces the ‘NJATTUVELA’ as season cycle for agriculture, based on native wisdom in detail. The new edition of the Malayalam calendar is the inclusion of 10 ‘PASURAS’ written by Tamil Bhakti poet and translated by renowned poet Attor Ravi Varma.

A simple guy, trying to create his life meaningful; thats all.

View all of pringlers's posts.