When you walk in to a movie whose scriptwriters happen to be Udayakrishna and Sibi K Thomas, all you look for is entertainment and not a layered story. Karyasthan is no exception in terms of story, but the question remains, does it deliver the entertainment? The honest answer would be Yes.

Karyasthan rests on a very thin story line of two families who are at each other’s throat due to an incident which happened years ago. Enter Krishnan Unni (Dileep) as the ‘karyasthan’ of one of the families. Krishnan Unni is related to one of the families and his sole purpose is to bring the two families back together as they once were before the hatred began. How he achieves his goal forms the rest of the story. 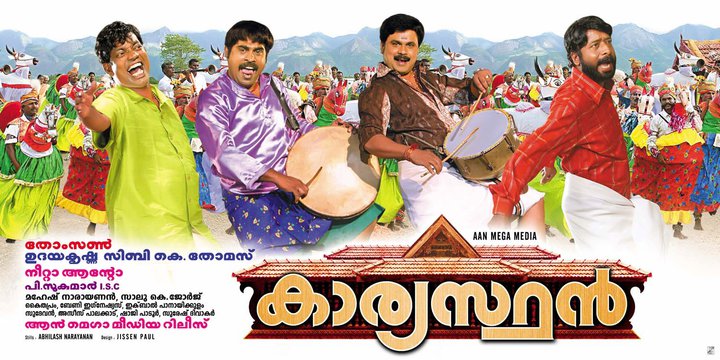 Akhila is very good and impresses as Sreebala. Though her character has less screen time, she has good screen presence and is definitely has a bright future. Suraj, Salim Kumar and Harisree Ashokan take care of the comedy department and have to say Suraj stands out once again.

Music directors Berny Ignatius come up with some good hummable songs which have been beautifully and colourfully picturised. Though some of the intended comedies fall flat, the duo of Udayakrishna and Sibi K Thomas have come up with a good commercial script with loads of fun and entertainment. The story happens to be a tried and tested formula but director Thomson has done well to keep the audience interested. Thomson has done considerably well in his debut venture and is surely another promising commercial director.

On the filp side, the movie overstays its welcome by a considerable 15 – 20 minutes. The action scenes appear clumsy at times.

Karyasthan is a fast paced entertainer with good fun quotient. Catch it at cinemas and you won’t be disappointed.