The state’s first artificial turf is getting ready at the Regional Sports Centre Kadavanthra, Cochin. The imported green turf costs Rs. 1.25 lakhs and will be suitable for games like seven-a-side-football, futsal, handball and volleyball apart from providing a training space for athletes in general. 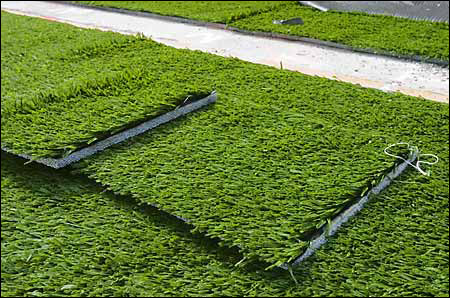 Lemonta (an Italian company) is installing the green carpet surrounded by a 200 m synthetic track. The turf is expected to be completed in a week’s time. The turf is said to have a life time period of 8 years ( usage of 8 hours a day). RSC secretary V Manohar Prabhu said the facility, along with the 10 m rifle shooting and powerlifting arenas, will be officially inaugurated in January. “The floodlights will be installed within the next six months and a golf putting area is also being planned,” he added.

“Seven strips of synthetic grass, made of fibrilite, have been laid and the process of applying glue to bind them together is currently on at the ground adjacent to the sprawling Rajiv Gandhi Indoor Stadium. Later, sand and rubber granules will be sprinkled to give the turf a natural feel,” he added.

The expert lead of the turf is Mr. Lopez from Lemonta. Mr. Lopez  has previously worked with football clubs like Celta Vigo, Lucena and Salamanca F C in Spain, Braga and Association Salgueiral in Portugal apart from helping lay the first artificial turf in Georgia with FIFA certification.