Well, I decided to take an urban hike from Palarivattom to the heart of the Ernakulam city through back roads last sunday given the traffic would be less and with the hope that I may come across some unexpected and pleasant surprises unseen during my usual jaunts. However, I was entirely disappointed, only to find more of the same, accumulated areas of trash (mainly plastics) and unkempt back roads, at times juxtaposed to rather expansive/expensive homes and upscale business properties. 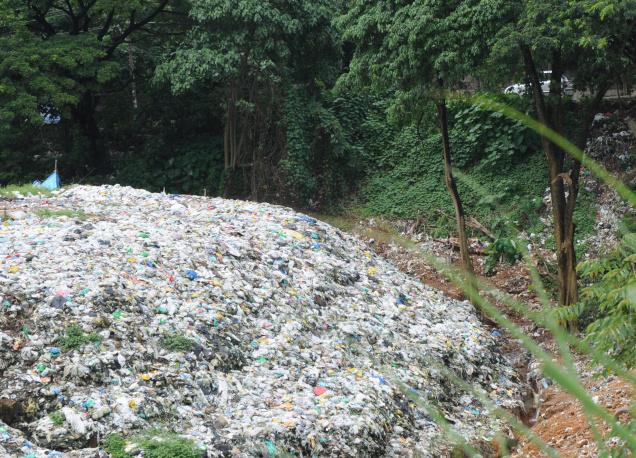 What can we do about these unpleasant sights of accumulated trash especially in residential sections of the city. Are there not neighbourhood committees who address these concerns. How can one have a beautiful home surrounded by such unattractive sights immediately outside their gates.

My father resides on South Janatha Road and they have a neighbourhood association who takes these concerns very seriously. The other day, I found a large sac filled to the brim, spilling over with plastic trash  outside the gates of my father’s house…not sure how long it had been there, whether it flew off some waste truck or whether someone intentially discarded waste along the way. Either way, I wore my garden gloves, sealed the sac and informed our waste man who checked the sac, found to belong to some waste organization…he immediately reported the concern to our neighbourhood association who then contacted the waste organization, fined them 2000Rs and requested they immediately collect the material and dispose it appropriately without delay which they did. South Janatha neighbourhood association arranged a private waste organization to pick up trash three times a week for all homes(to include the neighbouring poor who needen’t pay toward the cost), some ten years back, after seeing that the city trash pick up was insufficient.

In the States, even if it is the city’s responsibility to address these concerns, the neighbourhoods and buisnesses take great pride in their neighbourhoods, organize volunteers including children to help pick up neighbourhood trash as part of weekend activities. Why can’t we do the same…we need to shed class consciousness and get our hands a bit dirty, be an example to our children to respect our surroundings, our environment…if we wait for the government to do everything,  will be waiting for a long time. What do you say?

There needs to be more landfills, privatization of recycling and waste management, involvement of residences, businesses and individuals to improve this miserable problem!

It is simply appalling that we have allowed such a beautifully green city  to become a land of waste! It is everywhere…simply cannot escape the sight!

A Mallu, a practising Physician in Family Medicine and Urgent Care in USA, resides partly here in Kochi. Passionate about human dignity and respect for the environment.

View all of najmeer's posts.